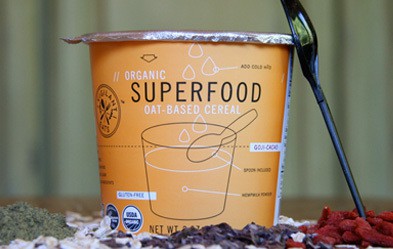 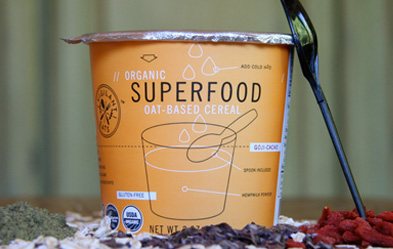 It always seems like breakfast is the most difficult meal of the day… at least it is for me!  Unable to eat eggs, dairy and gluten, I often end up stranded when traveling or staying at someone else’s home because the most common elements of breakfast don’t agree with me.

And of course I know plenty of gluten-free folks who eat junk food for breakfast — waffles, pancakes, sugary cereal.  Sure these food choices might be gluten-free, but it doesn’t make them healthy in the least and oftentimes leave you starving only a few hours later!  Maybe they were fine as a child being the Saturday morning treat, but they’re not appropriate for every day consumption.  Too starchy, too high glycemic, too much sugar…

So yeah, breakfast is a problem for many of us.  The reasons might differ, but the end result is all the same leaving the question about what to eat on the table.

My breakfast world got rocked back in December when I was contacted by an Indiana-based company called Vigilant Eats.  They developed a quick, easy, nutrient-dense, gluten-free, organic oat-based Superfood meal that’s hardy, really tasty and surprisingly simple to enjoy ANYWHERE.

Let me break this down for you —

Quick – You can easily eat this breakfast on-the-go and especially while traveling.  The spoon is inside the cup so you don’t even need to worry about grabbing a spoon.

Easy – Say bye-bye to worrying where you’re going to get almond milk or hot water. The only ingredient you need to add is cold water. That’s something you can get anywhere.

Nutrient-Dense – Vigilant Eats have done an amazing job at filling up the Superfood breakfast with as many nutrients as possible.  They’ve jam-packed this cup so that your breakfast will actually count towards fueling your entire day.  I’m sure you’ve heard of ‘Superfoods’ and that’s what you’re going to get in here — chocolate, goji berries, hemp flour and cinnamon to name a few!

Gluten-Free – Vigilant Eats Superfood is made in a dedicated gluten-free facility.

Organic – Say bye-bye to pesticides and GMOs (genetically modified organisms) learning in your food. You won’t find any in this!

Hardy – Vigilant Eats Superfood breakfast really sticks to your bones.  Why?  Because it’s nutrient-dense as I shared above.

Tasty – When I initially saw the ingredients of this product, I was a bit hesitant about how it might taste.  Maybe even skeptical would be a better word… But after opening the product up and eating half of it, I personally called Vigilant Eats CEO Doug Siegel to tell him on a Saturday how much I loved the taste.  He burst out laughing saying that he wasn’t shocked.  So yes, it’s good!

Enjoy ANYWHERE – If I have yet to convince you with the proceeding points, then let me reiterate how easy this product is to eat anywhere.  I can pack it in my suitcase, I can bring it on a plane and eat it at my seat, I don’t have to worry about refrigeration when I’m traveling, and I can fit one in my handbag so I’m not stuck eating a banana at breakfast.  All you need is cool water.  That’s it!

Plus, the Vigilant Eats Superfood is vegan, low in sugar (6 grams to be exact) and high in fiber (8 grams).  I can also recycle the cup as well, which is another added bonus since many single serving options out there aren’t recyclable.

Go check them out at Vigilant Eats … new flavors will be on the shelves soon as well!  If you want to get your hands on some now, check this out…

Here’s how to enter…

In order to be considered for the “Vigilant Eats Superfood” giveaway, you must complete these 3 steps:

1. Leave a comment below sharing which are you favorite superfoods!

2. Register for my monthly newsletter in the box here (if you’re already on the list, then you’re good to go!).

Get 1 bonus point for each additional step:

Thanks for entering and I look forward to picking this month’s winner! Contest ends Thursday 3/13/13 at 4 pm ET. To be eligible for this prize, you must live in the US.