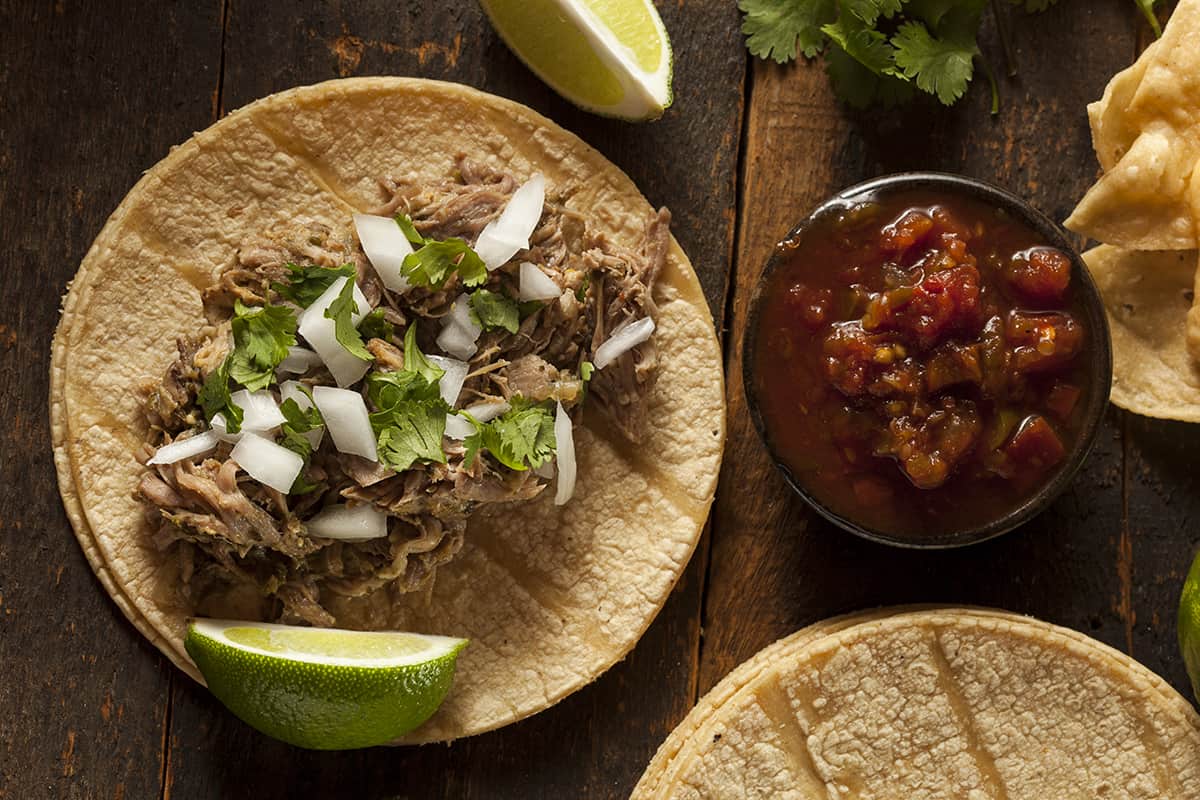 Many years ago, I was introduced to a variation of what is now the slow cooker Mexican Chicken that you’ll find here. Over the years, I refined the recipe and have shared it with thousands of clients. By far, this Mexican Chicken recipe has been one of the most popular recipes EVER.

And that may sound like a huge claim, but considering the many thousands of people who’ve gotten their hands on it… by far, it’s one that they’ll typically tell me was a total crowd pleaser.

– it requires very little prep time. You can throw it into a crockpot in less than 10 minutes.

– you don’t have to brown the meat… so it’s one less step.

– it can cook while you’re at work or in bed catching some shut-eye.

– you can serve it to almost anyone (obviously not vegetarians or vegans) and they’ll love it. And that includes non-gluten free people… who have no idea that it’s gluten free.

– it’s very flavorful and can be used for making “burrito bowls” (without the tortilla), tacos, or even loaded nachos.

– the recipe is really clean.

It also freezes incredibly well so if you’re into meal prep, you can turn some of it into leftovers for other meals. 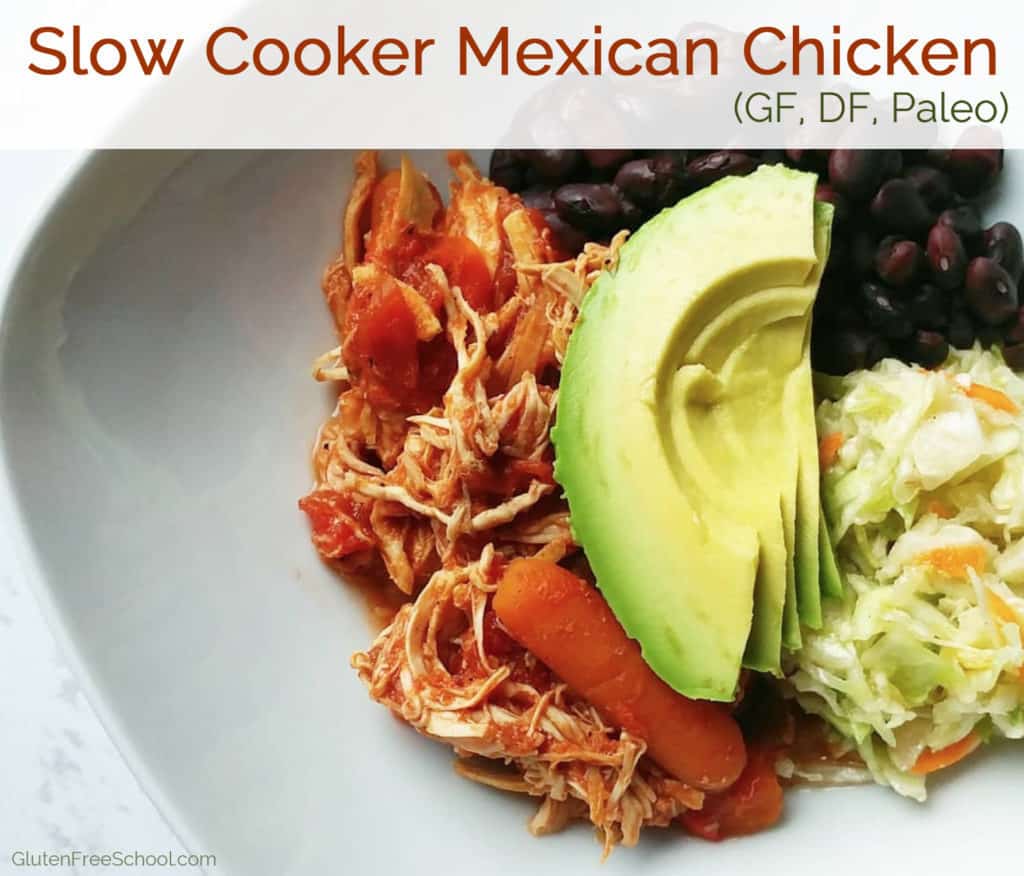 Another plus for this recipe is that it is Gluten-Free Sugar Cleanse Compliant. This means that it’s great to make (and eat) when you’re trying to kick your sweet tooth that often arises after going gluten free.

I’ve spent enough years fighting my own sugar demons. And I know beyond a doubt that having healthy, easy go-to meals makes all the difference between staying on track and going way overboard.

While I love lots of flavors and fancy meals, it’s honestly not practical on a daily basis.

So that’s how this Slow Cooker Mexican Chicken recipe became a staple in my home.

Heck… I have clients whose picky husbands ask for the recipe because it’s so good (and they aren’t gluten free).

I hope that you’ll enjoy this meal as much as everyone else does!

Mexican Chicken can be turned into a complete meal with the following simple additions:

I always make lime slaw (a yummy staple I’ve eaten time and time again in Costa Rica). I promise to add that to the blog soon so that you too can pair it with this recipe. It’s incredibly simple to make (takes maybe 6 minutes) and adds an extra zing to these types of meals.

You can certainly add in canned beans (always make sure to rinse them well to get rid of the “fart foam”) or make your own in an Instapot (like I do). Then topped with some fresh avocado… and wow, do you have an amazing meal!

Oh, and if you’ve never cooked with bay leaves before, I’d recommend that you check out this point about why you’ve got to remove them before shredding the meat. 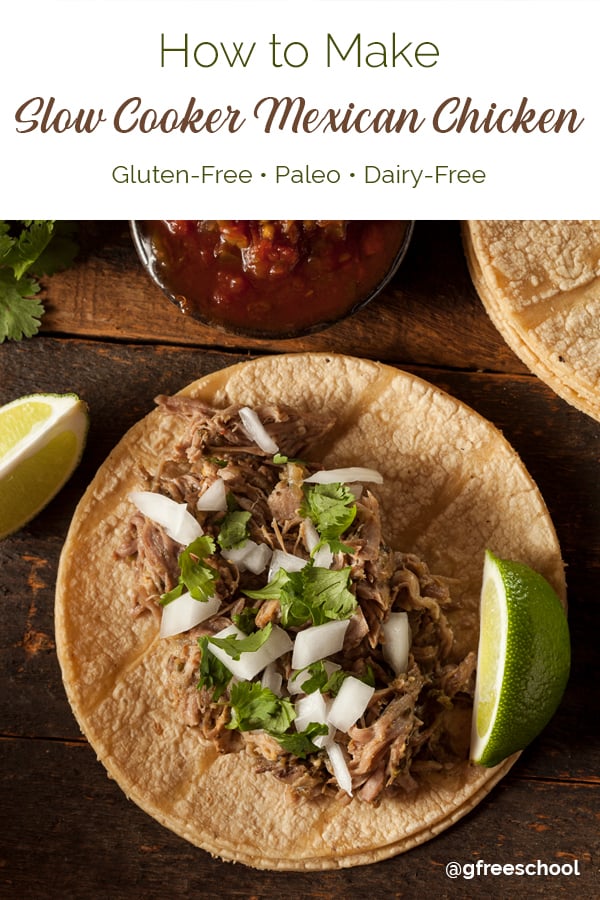 This recipe is so incredibly simple. There's absolutely no need to brown the chicken ahead of time especially because it will only dry the chicken out.

The final recipe will keep in the fridge for about 4 days. You can easily freeze the rest for future meals!