Should You Worry About Gluten Free GMO Food? 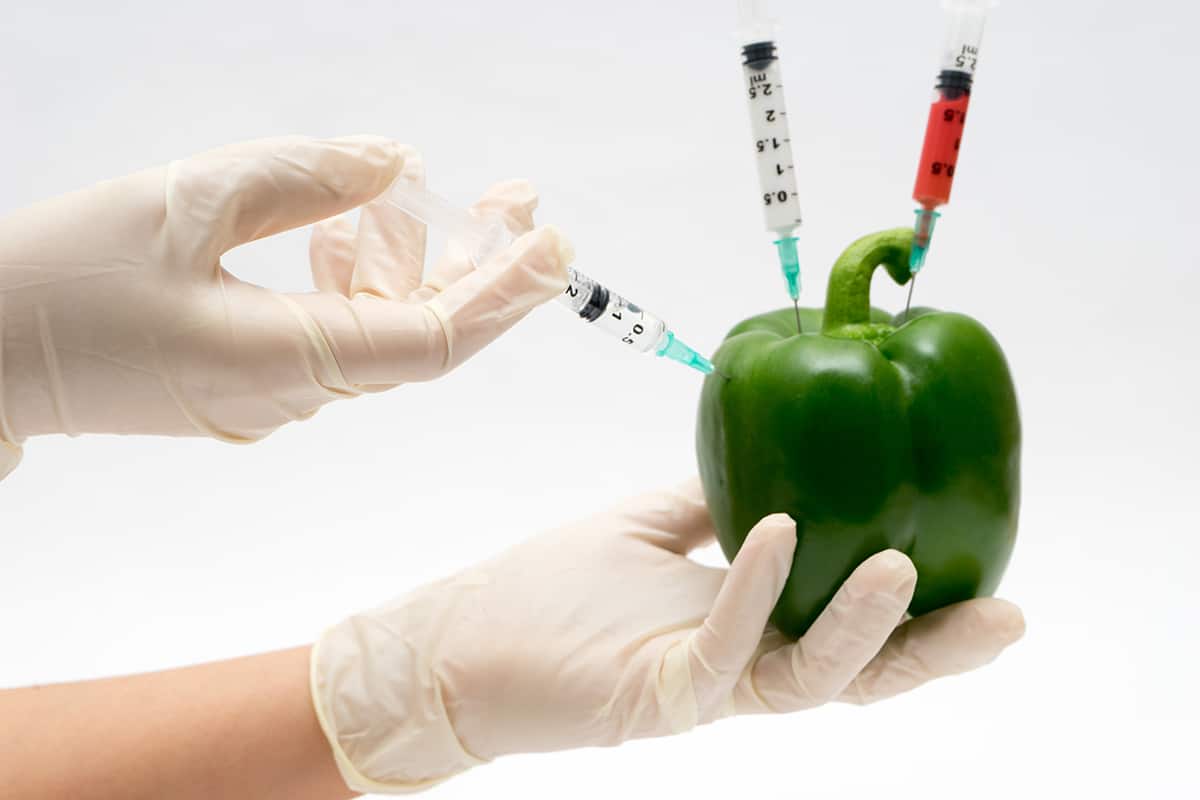 You already worry about gluten when you eat gluten-free, but what if there are some other seemingly innocuous food items on shelves that could be of concern? Are you concerned about gluten free GMO foods?

What if it were the “healthy” and “natural” stuff like vegetables were the issue… would you want to know?

How Gluten Free GMO Crops are Killing You

What I’m talking about here are GMO crops (or Genetically Modified Organisms for those not in the know).  For a variety of reasons, scientists identified and tinkered with a harmless zucchini plant (as an example) so that it would be more resistant to virus and fungal infections.

Then there’s the corn used in so many gluten-free products that’s now resistant to to being sprayed with Round-Up Weed Killer.  The chemicals can’t be washed off the plant because they seep all the way inside to the parts you eat and still exist in the gluten-free food products you buy.

It gets even worse now that companies and researchers are getting grants to genetically manipulate wheat and other gluten-bearing crops to make them gluten-free!  They believe that they can silence the genes that code for gluten production.  It’s possible that you could see a gluten-free wheat bread sold on store shelves at some point made from these frankenfoods (aka. GMOs). Yikes!

Honestly, I’m not okay with eating chemicals just as much as as I avoid gluten.

As you know, I advocate for all gluten-free folks to focus their diet around whole, naturally gluten-free foods.  But the problem then arises with the issue of GMO crops in our food supply that you may also eat something that’s marketed as natural when it’s truly not.  The effects and consequences are unknown (as you’ll come to learn in a moment) and could have an even greater impact (like a giant wrecking ball) on a debilitated digestive system.

So I turned to my friend Heather K. Terry, the COO of Nibmor Chocolate, who takes the issues of GMO crops very seriously.  I’ve learned much from her on this subject and I invited her to share some of that wisdom with you in this week’s guest post.

Why You Should Worry about Gluten Free GMO Foods

By: Heather K. Terry, COO of Nibmor Chocolate and Co-Founder of the Gluten-Free Sugar Cleanse

If you ask me, you should absolutely care and be concerned about GMO crops.

As the rise in obesity in the United States (an epidemic that has now traveled well beyond our borders) and questions over the safety of our food supply start to make their way onto every major news program, it’s become difficult for us to place these issues at the back of our minds.

And after being diagnosed with something like Celiac Disease or Gluten Intolerance, GMO crops and Farm Bills might seem like one more hassle on top of your fear of getting glutened. But I’m here to tell you that they shouldn’t be and there are ways to make choices that not only benefit your health, but the health and well-being of those around you and the planet.

Working in the food industry, I often forget that the mainstream public is not privy to much of the alarming food-related information that passes my desk on a daily basis.  Also, that we all view the issues of food politics through our own filter. I’d argue that it wasn’t until recently that most of us ever really gave food politics a thought. It’s national Non-GMO month and in putting together some thoughts to share on the topic, I couldn’t help but reflect on a recent episode of Real Time with Bill Mahr which aired at the end of September. On this particular show, GMO crops were the focus thanks to the guest Jeremy Seifert, the director of ‘GMO OMG’ (watch the trailer HERE).

In addition to Jeremy Seifert, David Frum was also on the panel. If you don’t know who David Frum is, he’s a pretty smart guy. He’s contributing editor to the Daily Beast, a graduate from both Yale and Harvard and he worked for the Bush administration. I always appreciate when David Frum is on a show like Real Time because I feel he brings a very pragmatic view point even if I don’t always agree with him.

During the panel discussion, Bill asked, “Is this [GMO crops] a problem?”

Say what?! Those aren’t GMOs!

There was then some debate about science and our food system, which undoubtedly there has been a lot of tampering with on that front (consider how processed some gluten-free food products are as interesting food science experiments). Jeremy Seifert brought to everyone’s attention that, until recently, scientists have worked within the same species by selecting the best seeds for use. Which is true. Before David Frum could respond, Mr. Seifert stated, ‘I have yet to see a tomato have sex with a fish and produce like a new…’ and applause broke out.

So that was my ‘OMG’ moment!  How could a man so educated like David Frum not understand what a GMO really is?  If he doesn’t really understand what GMO’s are and talks about politics all day long, how are any of us supposed to be in the know? It’s because of how much confusing information is out there.

Now before you begin to feel like it’s all a lost cause, I want to clarify this whole GMO thing for you.

What is a GMO?

According to the Non-GMO Project, a GMO is a genetically modified organism; plants or animals created through gene splicing techniques of biotechnology. It means that the DNA from various species (plant, animal, bacteria and viruses) are spliced to create unstable combinations that would never occur in nature (back to the fish having sex with the tomato argument).

Why is this such a problem?

GMO crops are so new that we don’t really know what these gene combinations are doing to us or our environment (though there are a few brave souls who have some highly educated guesses shouting it out). The large companies invested in this technology and seeing GMO’s succeed will not release 3rd party information to the public and have used their lobbies in Washington to prevent it. They are only required by law to provide their own studies which of course give GMO’s rave reviews.

Something is a bit fishy here, eh?

If GMO’s are as safe as the companies who produce them claim, why aren’t these science experiments labeled in order to give consumers like you the choice of whether to buy them or not? Why can’t moms out there easily know what she’s feeding to her kids? Why so much resistance to allowing consumers the ability to know what’s in their food? I smell a rat (or a fish- sorry, couldn’t resist), and I’ll bet your thinking the same thing too.

How do you avoid GMO crops?

If the thought of consuming science experiments masked as food is alarming to you and you want to avoid them, here is what you need to know:

There are eight GMO crops in the US which include: Alfalfa, Canola, Corn, Cotton, Papaya (almost all of the crop that comes out of Hawaii), Soy, Sugar Beets, and Zucchini and Yellow Summer Squash.

Write this list on a post-it and keep it in your wallet. Look for these ingredients on food labels when you’re shopping. As someone who is already searching for hidden gluten, you are likely reading labels already. If you spot one of these foods and it’s not marked organic (by definition, organic foods can not contain GMO’s), place it back on the shelf and be on your merry way.

Red alert: most of the sugar used in food products in the US is beet sugar. Again, if the term “sugar” is not labeled organic or non-gmo, step away!

Look for the Non-GMO Project Verified symbol so that you know you’re safe.  This symbol can be of particular good use in the packaged food aisles. I’ve been pleasantly surprised by the commitment from large conventional retailers to get Non-GMO products on the shelves (Costco is one that immediately comes to mind).

Use one of these apps you can put on your phone to easily locate verified products:

So now you know!

You’re on your way to becoming one savvy shopper.

So if I had sat on that panel with Bill and his guests and were asked if I thought GMO crops were a problem, I’d say this — “Yes, it is a problem. But mostly, I think the biggest issue here is that we are not being told what is in our food. We spend a lot of time in this country talking about our “God given rights” and how important our freedoms are. Isn’t the issue of GMOs important enough to include? As someone who lives in the United States of America, I believe I have the right to know what is in my food and how it’s produced. It doesn’t get any simpler than that.”