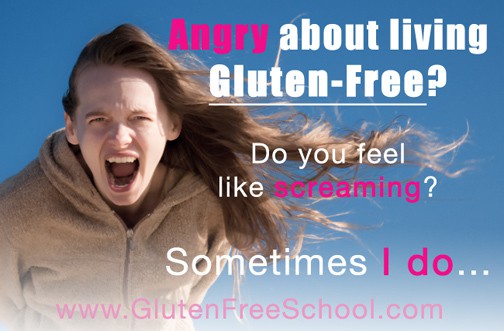 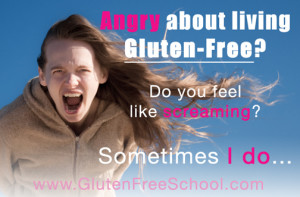 At some point, we all get angry…

Whether you’re pissed that the foods you love are now off limits and people stop calling you to go out, or you just throw in the towel disgusted from trying so hard to be gluten-free and eat whatever everyone else is… there’s your anger showing.

Aside from getting several angry emails a week from people new to the gluten-free lifestyle and Gluten Free School community venting their own personal frustrations, I even get occasional angry unsubscribers to my newsletter list who write me a brief explanation of their departure which goes something like “you’re just too damn upbeat for my tastes and at this point, I’m angry and can’t handle trying to be happy about being gluten-free.  But thanks for valuable services you offer and I’ll be back when I’m ready.”

At first I was really taken back by those angry emails and moreso with the unsubscribes, but I’ve come to realize from cruising around the web that the undertones of anger seem to be getting more apparent.  Perhaps it’s because there are more of us who can’t eat gluten and thus a bigger crowd may equal a louder voice.  But maybe a larger sign of the times since everyone just seems angrier these days…

Now I’m not trying to dismiss anyone’s frustrations, stress and anger that they carry with them for whatever reason (and yes I know the reasons personally and have heard them many times over from clients, emails, blogs, etc.).  Even the Gluten Dude offers an anonymous ranting section on his blog which is both much needed and also heart-felt.  I appreciate the time taken by the readers who’ve crafted their frustrations into a clear message of “Hey, I deserve to be treated fairly too, so get with the f#$%ing program and give me some respect!”

So in honor of helping you all understand a bit more about me, where I’ve been and what I do in my own free time outside Gluten Free School, here’s my ‘rant’… the situations and things that get me fired up.  Though on some level I would love to air them all the time, it’s not what I want for the basis of my mission at Gluten Free School.  But to let you know that I’m not perfect and get pissed, here goes a list of what makes me angry:

I used to get angry at all the stupid comments I’d get from people like “you must not eat anything” or “how’s that Atkin’s diet going for you” or how “this problem” was “all in my head”.  I would sometimes get snippy with uneducated waitstaff who didn’t seem to care about serving me with any amount of compassion since my order seemed to complicate everything.  I’ve been told by friends and family while eating out to ‘stop being so difficult’ even though I was trying to make the right dining choice by merely asking questions.

And on some level, I refuse to believe that my food sensitivities will get the best of me and keep on expanding.  I refuse it at the core of who I am and keep on trying different things to see what I can do to remedy my personal situation not in hopes of eating whatever I want, whenever I want it… but just to be less reactive, less sick, and at the end of it all, having more peace in my life.

So anger for me has turned into a clarifying force that drives me to do what I do here at Gluten Free School as well as caring for myself.  I had to find a healthy way to channel it and turn it into something more than just making me explode all the time. I’m grateful for the Gluten Dude and the space he provides for people to vent, but I also encourage those who’ve written in to make sure that you’re not venting just for venting sake.

Because here’s my concern… what happens if you don’t productively deal with the anger you’ve got?

Well — depression, alienation, more anger, fear, despair, loneliness, and a bunch more adjectives properly describe your state of being may come to permanently take up residence in your life.  Anger’s got to be dealt with.  Though it can push people into action and get the ball rolling, it can also make you sick.  And making yourself even more sick is not good!  In those instances of being in an unrelenting state of anger and it’s many manifestations, I’d definitely suggest getting some  help.  There are certainly licensed mental health professionals that help people struggling with the transition to find clarity, action, and courage to do whatever they need to do in order to care for themselves.

So in this instance of ‘ranting’, what pisses you off about being gluten-free?

And what have you done about it?