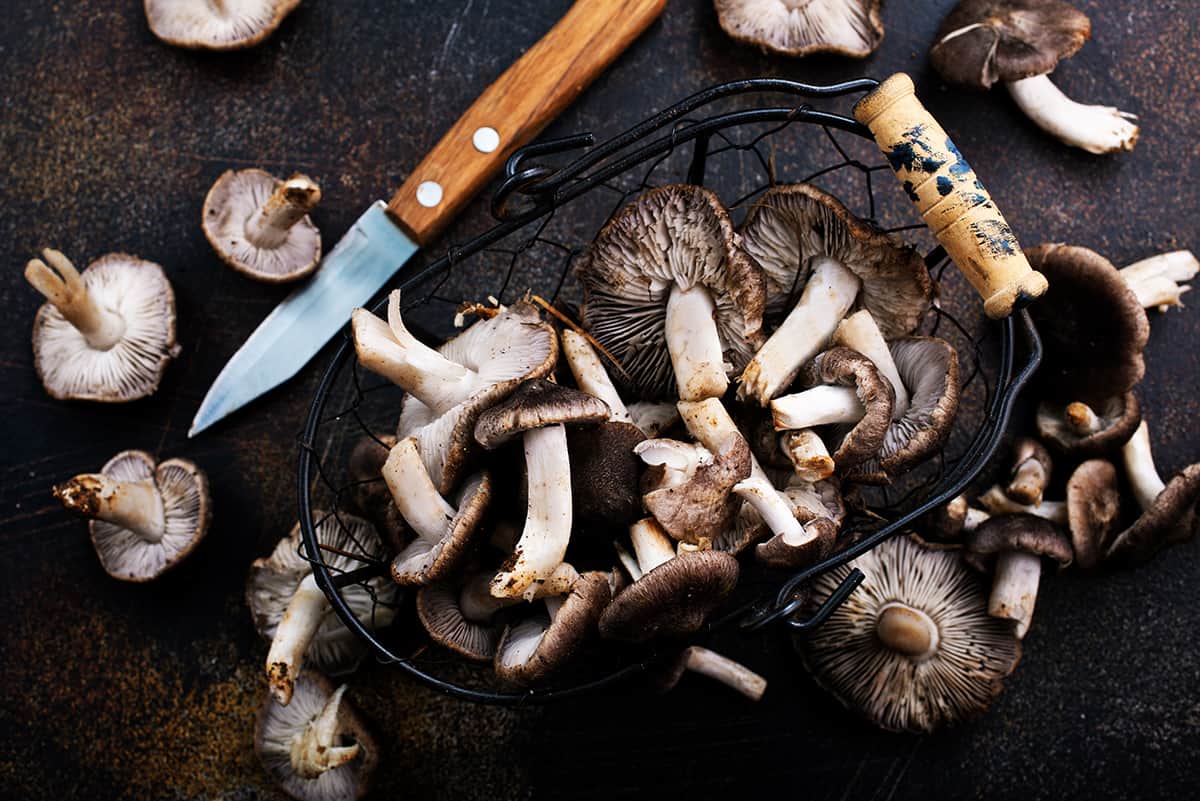 Recently I was asked on the Gluten Free School Facebook page – Are mushrooms gluten-free?

The information shared by the commenter left me rather nervous because, well… I love mushrooms!  Please don’t take them away from me too!!!

[NOTE: the official conclusion to whether mushrooms are gluten-free or not can be found here.]

Before I just spouted off some random thoughts or assumptions, I decided to commit some serious time to researching how mushrooms are grown and where gluten might be introduced.  I remember how the potential coffee/gluten connection barreled down the GF community like a tsunami and I have no intention of raising false alarms.  Plus I’ve been pretty busy putting together the revamped Gluten-Free Sugar Cleanse online program starting soon and couldn’t just put that project on hold.

Then I began to hear whispers in the wind about mushrooms and gluten earlier this week and stepped up my research so I could accurately provide information to you all!  The articles I’ve read so far which do state that mushrooms are not safe to eat lack the background necessarily for us all to make sound decisions.  Though the “I got sick when…” reason is certainly valid, it also stings like hell for a group of people who’ve already given up quite a bit.  So let’s be sure we’ve got our ducks in a row, right?

Interestingly, I happen to live relatively close to the “Mushroom Capital of the World”, Kennett Square, PA.  So it was relatively easy for me to talk to local farmers who truly love what they do and have been working their land for several generations.  Before I go any further, I do want to say that I deeply appreciate the time that each farmer and company spokesperson provided me.  Some pointed me to online resources while others spent quite a bit of time on the phone detailing every single ingredient used to produce their mushrooms.

Also please note that the mushrooms I primarily focused on were portobello, crimini, shitaki and white button.  Wild mushrooms were not considered in my research as they grow in the wild upon decaying matter and are probably fine so long as they did not become contaminated in the handling process.

The Ingredients are Troubling…

Depending on the farm and the type of mushrooms grown, ingredients vary.  I’m pretty sure it could be possible to find a farmer who might not use any glutenous ingredients, however I did not come across any.  Generally speaking, gluten can be introduced in the growing process once the farmer chooses which the ingredients he’ll use.  They range from using actual wheat or rye to wheat bran or wheat straw.  Some farms also use what is called Brewer’s Grain — the left over pulp that comes from making beer.

According to Joe Cordivano of the Cordivano Brothers farm, these ingredients (either one or a combo of them) are mixed with other items such as soybean meal, cottonseed meal, cocoa bean shells (left over from making chocolate), corn cobbs, manure, gypsum, etc.  This is not meant to be a complete list, but just some examples of different materials which could be used in the substrate (or soil) which is created and composted before the mushrooms even begin to grow.

Here are two videos which list some of the ingredients used.  In this first video from the Phillips Mushroom Farms in Kennett Square, PA, you’ll hear the general manager Jim Angelucci mention using wheat bran in the substrate for growing Maitake mushrooms at the 1:55 minute mark.  They then talk about using hardwood saw dust, millet and wheat bran to grow Shiitake and Lion’s Mane as well.  Jim also shared with me that in the case of “some exotic mushrooms (Shiitake, Maitake, Oyster, Pom Pom, etc), the substrate is a blend of oak sawdust, millet and wheat bran.”

This second video was taken at the Windy Field Farms in New Hampshire.  Here, the farmer talks about growing Oyster mushrooms with Wheat Straw at the 2:30 minute mark.

You might be saying to yourself, “Ok, well what does this have to do with the mushroom itself?”

Good question!  My concern comes from the situation wherein mushrooms grow in gluten-bearing substrate and are handled in an environment where gluten is present.  There doesn’t seem to be concern for the mushrooms to not ever come in contact with anything else which has touched substrate.

I should say this… The part of the mushroom we eat doesn’t grow directly on top of the substrate.  Some mushrooms such as Portobella, Crimini and White Button are grown on top of a “2-inch layer of peat moss (casing) [which] is applied to the top of the substrate and acts as a water reservoir where the mushroom gets its water” according to Jim Angelucci of the Phillips Mushroom Farm.  Even Gerald E. Yeatman of Mother Earth Organic Mushrooms said that in this instance, the mushrooms only touch a layer that contains peat moss and limestone.

Other varieties can be grown on bags which contain substrate.  The substrate is inoculated with the spores and after the bag is sealed, holes are poked in the plastic.  The mushrooms we eat literally grow out of the holes (as you may have seen in the videos above).

In other cases, certain mushrooms can be grown on wood blocks such as Shiitake which would most likely be safe assuming they weren’t contaminated at any point with gluten.  This point was referenced by the farmer in the second video.

Furthermore, it bears repeating that wild mushrooms grow on decaying matter, thus there is not a question about gluten in their growing process.  However you’d have to double check with the farmer on how the mushrooms were handled to insure no contamination should they be stored with the farm-raised variety or handled with the same gloves.

As Jim Angelucci of Phillips Mushroom Farm shared with me, “If the spawn (carrier of the mycelium) uses rye or wheat as the carrier, it does not come in contact with the actual fruiting body.”  So whatever is growing in the substrate and breaking down the decaying matter isn’t what you’re going to eat anyway.  So there’s a chance that the actual mushrooms in your dish never touched gluten.

I did inquire to both Jim and Joe about the composting process that the substrate goes through before any spore is even introduced into the picture.  Joe Cordivano composts his mix outside for 21 days and then inside for 13 days to start the process of breaking down the proteins for the mushrooms to use as food to grow.  The problem here is that though the composted ingredients become hot and can reach temperatures upwards of 214° F, the stability of the gluten protein will resist denaturing until you hit 500+° F.  Thus, composting probably isn’t going to be the solution for making the substrate gluten-free.

Additionally, I have to say that I’m concerned about the environment in and on which the mushrooms are grown.  The bags were probably touched by gloves that have handled gluten-bearing substrate making them a potential issue for contamination.  Not to mention that the entire environment is really contaminated with gluten if any of the suspect ingredients are used in the substrate.

As to whether the actual mushroom body contains gluten?  No one seems to know the answer to that question.  Jim Angelucci is a board member on The Mushroom Council, the mushroom industry’s national promotion and research board. He said that as far as he was aware, mushrooms have yet been tested for gluten, however he would definitely raise the point at their meeting next week.  Jim is also checking with other industry consultants to determine if gluten could be an issue for mushrooms and will get back to me with more definitive information as it becomes available.

And as an aside… for those of you concerned about GMOs (aka. Genetically Modified Organisms), it might be fair game to ask — Are conventional mushrooms grown on GMO soy and corn?  It’s possible.  So even though the mushrooms themselves aren’t GMO, the food they are fed could be GMO.  Yikes!

It doesn’t yet appear that the gluten-free community has a definitive answer.  Testing and more research is needed before all of the GF mushroom lovers out there can sound the alarm.

The one curious point I’d like to mention is that there are plenty of mushroom products on the market that are marked (and hopefully tested) gluten-free.  Either the gluten results were too low to be measured or they didn’t contain gluten at all.  However there seems to be so many variables here that again, more information is needed.

For the moment, I am very cautious and concerned and will probably abstain from purchasing mushrooms until more information becomes available.  As soon as I learn more, I’ll certainly share!!

[NOTE: This story has been updated with another article which share the answer to whether mushrooms are contaminated with gluten.  Click here to read it!]

Sound off!  Share your thoughts & comments below about mushrooms and gluten!