Is Soy Dangerous to Your Health on a Gluten-Free Diet? 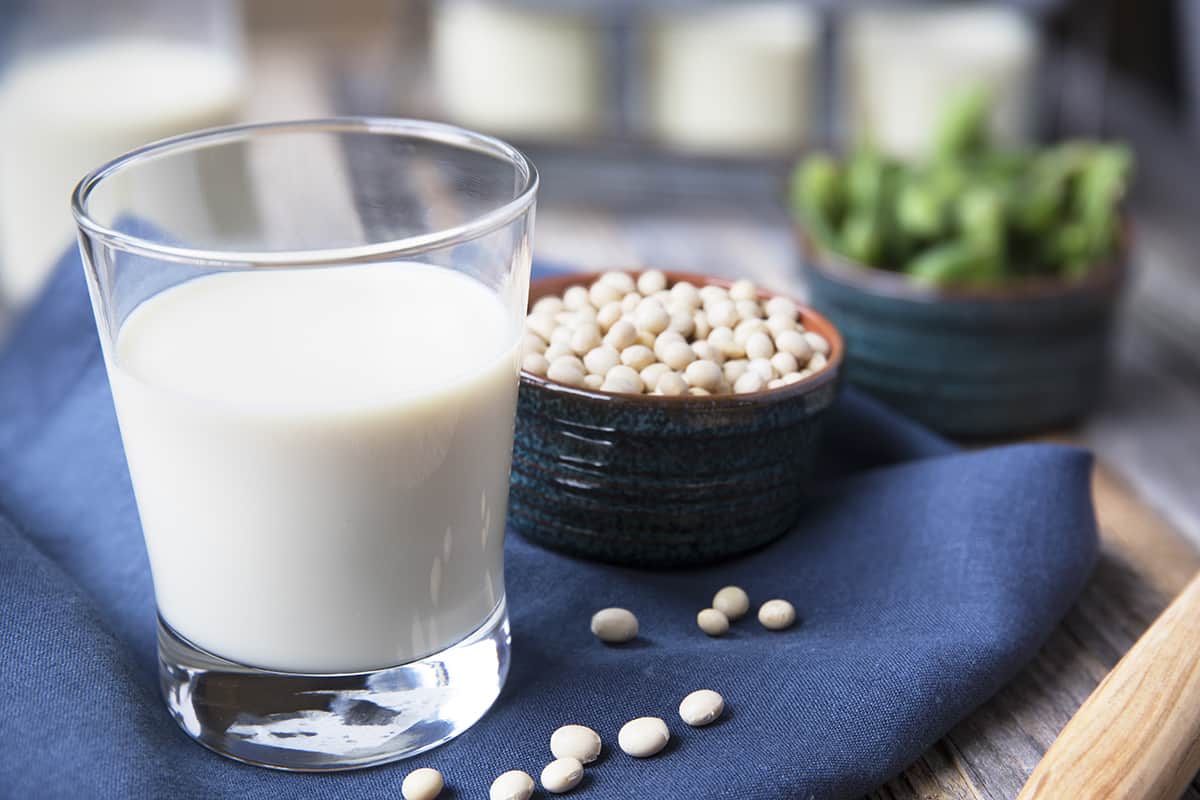 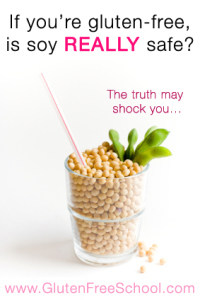 Is soy dangerous to your health if you’re gluten-free?  Do you consider soy milk to even be healthier than regular milk?  Do you worry about GMO soy?  Or perhaps you’re concerned about the rumors you’ve heard about soy being dangerous and disruptive to your hormones?

Is Soy Dangerous to Your Health?

These are all great questions that I find myself answering often.  Though I don’t believe the story on soy is quite as cut and dry as some out there (like those in the paleo world), I firmly feel that those of us who are gluten-free for whatever the reason – be it celiac disease, gluten sensitivity, gluten intolerance, thyroid issues or autoimmune problems – have tremendous reason to be weary and skeptical of the notion that soy is a safe alternative to most other traditional food products like meat and dairy.

Part of my understanding of soy has come from personal research since I was once a person who used soy-isolate protein powder daily to make smoothies and ate plenty of fake soy meat thinking that it was a healthy alternative to the real thing.  Though I’m certainly not alone, soy continues to boggle the minds of many who genuinely want to transition to a healthier lifestyle despite it’s numerous red flags which include messing with your hormones, being one of the top eight allergens and that most soy is derived from GMO crops (genetically modified organisms).

Meanwhile, there are plenty of health experts out there who rightly question whether consuming soy at the levels that the American public has been eating it is healthy.  It’s my intention to share with you a bunch of different perspectives so that you can have a clearer understanding on soy and make your own informed choice about whether to consume it or not.

Not All Soy is Created Equal

If you think that all soy is the same, I beg to differ.  Fermented soy and soy replacement products (like fake meat, cheese and milk) are incredibly different things.  I’d actually go so far as to describe soy replacement products as a modern invention which tries to overcapitalize on the health benefits of a far different traditional food that doesn’t actually fit the flavor palette of the Standard American Diet.

Fermented soy is traditionally what is/was consumed in Asian cultures.  Why?  Because the soy bean itself is quite difficult for the human body to digest.  So someone out there in history realized that we humans could certainly reap nutritional benefit from soy IF it was already somewhat ‘digested’ by fermenting it.  This process created more nourishing foods such as tempeh (from Indonesia), miso, tamari, and soy sauce which offer a distinct flavor that many of us equate with Asian cuisine.  Be aware that many of these options (with the exception of tamari) often contain wheat or barley, meaning they are not gluten-free.

On the other hand, soy replacement products are ‘frankenfoods’ which are highly engineered to look and feel like old favorites.  Generally any products made from soy, (ie. soy milk and yogurt, soy isolate protein powder, soy meat alternatives, soy cheeses, etc.) are what many include as problematic ‘processed white stuff’ in the Standard American Diet (like white sugar) that contributes to a diet full of ultra-refined food.  These products are NOT in any sense traditional nor have any sort of history with traditional cultures. Nor do I care how many ‘Heart Healthy’ logos food companies add to these products, they are not real food.

Tofu sits somewhere in between the more traditional options and those ultra-refined ones.  Though the origins of tofu remain a mystery, it appears that tofu was ‘invented’ by accident about 2000 years ago (possibly in China) and also fermented.  In Asian cultures, it was eaten in much smaller quantities than today – perhaps a few cubes in a bowl of miso soup rather than eating an entire block for lunch.

Lastly, edamame are the baby soybeans which have yet to fully mature and harden.  They also apparently contain the same amount of  toxins and phyto-estrogens as the products do.  Though there don’t seem to be any studies, the general consensus is not looking good.

Samantha Grant, CN, my nutritionist, impressed upon me years ago to be extremely careful with soy intake.  Soy naturally contains plant estrogen (also known as phyto-estrogen) which is quite similar in structure to that of the human variety.  By consuming soy, you add additional foreign hormones into your body which have the potential to disrupt your endocrine (aka. hormonal) system.

One of the most common concerns is the depression or reduction of thyroid activity (aka. hypothyroidism).  True story – I ran into a friend a few years ago from my old cycling team who shared with me this alarming personal story. His doctor told him to increase his protein intake and suggested getting some soy protein powder.  So, my friend began drinking soy protein shakes daily that also contained soy milk.  After several months of this, he began to feel quite run down and exhausted.  Turns out, all that soy created a huge imbalance in his endocrine system and he was diagnosed with hypothyroidism.  Since removing the soy from his diet and some medication (which he was almost off at the time of our conversation), his thyroid levels were slowly recovering to normal levels.

This is especially concerning to the celiac population because a celiac diagnosis means that you are “nearly four times more likely to develop an autoimmune thyroid condition, the most common types being Hashimoto’s disease and Graves’ disease,” according to the National Foundation for Celiac Disease.  So why would you potentially increase your odds further by loading up on soy?  Thyroid issues are no walk in the park!

Babies are not immune either from the woes of thyroid issues.  When fed soy-based formula, infants were tested with estrogen levels up to “ten times the level that can cause thyroid suppression in adults after three months, and eight times the level that can cause hormonal changes in adults after just one month,” according to Sally Fallon Morell of the Weston A Price Foundation.

It also can interfere with the natural onset of sexual development in girls as well as create problems for boys as they head toward puberty.  Soy formula has been shown to create zinc deficiencies.  And potentially lower a child’s “seizure threshold particularly in babies genetically predisposed to developmental disorders,” according to Kaayla Daniel, PhD, CCN.

And for those men out there and couples who are hoping to conceive, there have been some alarming studies such as one done by Harvard and discussed by Chris Kresser which demonstrates that even an “intake of only half a serving per day” is enough to significantly lower sperm count (which looks like consuming “one cup of soy milk or one serving of tofu, tempeh or soy burgers every other day!”).

[Click here to grab a FREE copy of my Gluten-Free Hormone Help Guide!]

Still another concern is that soy is known to be one of the most difficult legumes or beans to digest.  This is why traditional Asian cultures typically consumed fermented.  Aside from certain ‘anti-nutrients’ present, soy can also tax your pancreas and cause digestive distress for some.  If you’ve already got problems with bloating, gas, diarrhea and constipation, you may want to steer clear from soy to see if it could be another culprit along with gluten. 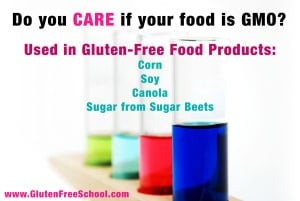 Whether you’ve yet to hear about the GMO (genetically modified organism) issue or not, it certainly affects you.  GMO crops like soy are allowed to be sold in the US food supply without being market or tested for actual safety.  Instead, the FDA basically figures they are safe to eat despite so many incredibly damming studies done by concerned parties.  It truly only takes typing in “dangers of GMO soy” into Google to view an incredible array of information and data which won’t make you feel good about GMO soy in the least.

The only way to know if the soy you consume is not GMO is to purchase products which are organic and specifically cite the soy as being non-GMO and organic.  However avoid purchasing soy from China EVEN IF IT’S MARKED ORGANIC since there are no organic farming standards in the country.  The upscale health giant Whole Foods got in big trouble for selling organic produce grown in China some time ago and sadly, their store-brand organic edamame are from China (clearly marked on the back of the packaging).

Another crazy thing to consider is that as scientists tinker with the genetic codes of plants, new proteins in the plant which didn’t formerly exist can be created which elicit an allergic response.  So many people are allergic to things like dust mites and shrimp and interestingly, I’ve read and heard it discussed by many alternative practitioners that there are “sections of the protein produced in GMO soy [that] prove to be identical to shrimp and dust mite allergens.”

My Suggestions to Get Around Soy:

1) Dairy Products – There are plenty of alternatives on the market that don’t include soy.  My first choice is always almond milk.  (If you want to make your own, here is my recipe.)  There are also other nut and seed milks out there along with coconut milk products.  Should you need some sort of mayo alternative, guacamole is always great, but you could also check out the vegan mayo line from Earth Balance which does have soy, gluten and dairy-free options.

3) Soy Lecithin – It’s everywhere and in so much food.  It is possible for companies to use lecithin made from sunflower seeds, however from what I understand, it is more costly.  Soy Lecithin is made from the oil of the bean rather than the protein.  The reason it’s used (for example, in chocolate) is to keep the bar’s ingredients from separating.  All you can do is encourage your favorite companies to make a different choice and avoid products that contain it if you’re very concerned.

4) Meat Alternatives – I know plenty of vegetarian and vegans out there who rely heavily on soy products to supplement their protein intake and provide some normalcy to their diet.  If you’re absolutely unwilling to add in any sort of animal protein, you’ll want to look more toward other beans, lentils, nuts and seeds.  Fake soy meat products are non-negotiable in my book.  If you choose to avoid meat, the fake stuff can be worse in so many awful ways.

Leave a comment below!  –  What’s your opinion about soy?  Do you believe it’s safe to eat? 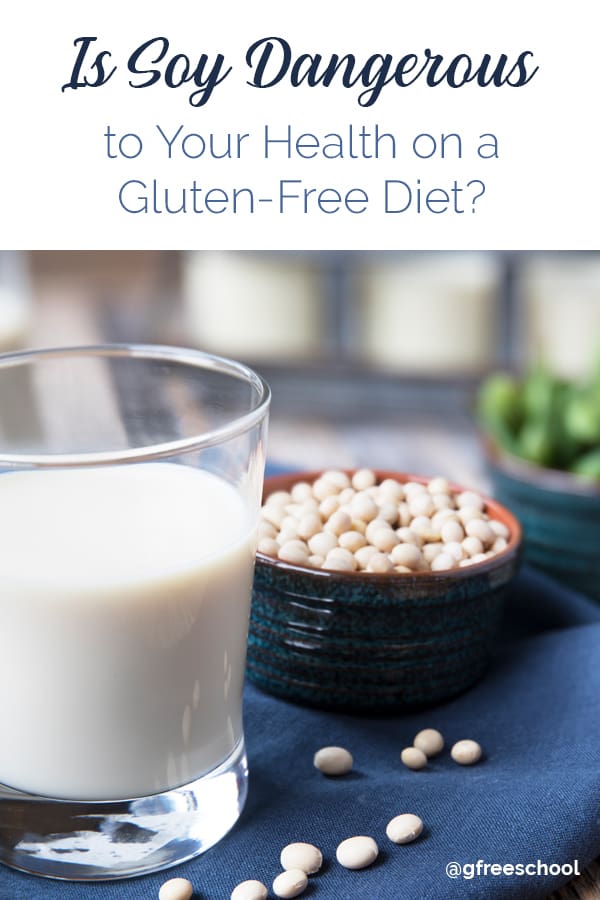